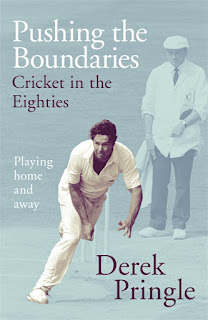 Join Derek Pringle, former Essex and England all-rounder and leading cricket journalist, for an evening of anecdote, humour and insight - from the maverick 80s to the modern game. First chosen by England in 1982 while still at Cambridge University, Derek spent the next decade as understudy to the great Ian Botham, compiling a playing record that included 30 Tests, 44 One Day Internationals, two World Cups (including a World Cup final), six County Championships and numerous one-day trophies. He also witnessed at first hand a period of English cricket full of characters such as Botham, Lamb, Gower, Gooch, Lever and East. His recent memoir Pushing the Boundaries: Cricket in the Eighties has received much acclaim: '... a fascinating and hilarious read (Daily Telegraph); '... eye-popping and hilarious' (Guardian); ... funny, original and astounding, often all three ... [Pringle] has delivered with interest on his promise to avoid a bog-standard, self-serving work; if he pushed boundaries in his career he has flattened them completely with this honest addition to cricket literature (The Cricketer).'