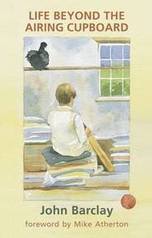 An acclaimed schoolboy cricketer, John Barclay made his Sussex debut in 1970, aged just sixteen. Two years later John joined the county as a promising all-rounder, going on to captain the side from 1981 to 1986. After retirement he managed the England team on two major overseas tours and became Director of Cricket and Coaching for the Arundel Castle Cricket Foundation, encouraging young people from less advantaged backgrounds to play and enjoy the game. To date, more than 200,000 youngsters have benefited from the scheme. John Barclay is President of the English Schools Cricket Association, President of the Cricket Society, and in 2009/10 served as President of the MCC. He is also the author of three books: The Appeal of the Championship, Lost in the Long Grass and his personal favourite, Life Beyond The Airing Cupboard - winner of the MCC and Cricket Society Book of the Year award.

Don't miss one of cricket's most distinguished and entertaining speakers!

Also available - signed copies of Life Beyond The Airing Cupboard.

Well, I was disappointed. Most emphatically not in our speaker – certainly not. But with Valentine's day in the offing, where were the strewn confetti hearts, long-stemmed roses in wineglasses, or Cupids hanging from the ceiling? Maybe Christmas set my expectations too high?

But to our speaker – Mr Jonathan Doidge. A man equally at home talking over by over about Yorkshire CCC, interviewing Grimsby Town footballers on the fly ('Do you like wearing shorts?'), assessing the going at Cheltenham (it dries up by the final day, apparently), or even throwing in a quick impression – think David Coleman, Eddie Waring or Bill McLaren. In short, a man imbued with sporting history, knowledge and enthusiasm. Getting lost at Ripon races aged just two was the experience that got him hooked. And, it must also be mentioned, a world champion and Olympic organiser to boot. Although to put these last two feats in context, the Olympics in question featured his brothers and friends in his home street in Horsforth, near Leeds, while the Subbuteo World Cup took place in the early 1970s with those same brothers as the opposition.

It is this depth and breadth that enables him to hold the attention such that during one story I was convinced that everyone was holding their breath so focused were they on the raconteur.

Jonathan touched lightly on his own history: proud of his Horsforth roots, young cricketer for Pudsey St Lawrence, and survivor of near-expulsion from school for leaving early to watch the Cheltenham Gold cup on TV! In the late 90s, advised to pursue his media ambitions by Sid and Irene Waddell, Jonathan took redundancy from the financial services sector to gain a first-class degree in Media and Sport at Leeds Trinity. Working for Sky, and later as a freelance, Jonathan commentated on Yorkshire CCC for BBC Radio Leeds, called Test matches, World Cups and T20 World Championships – sometimes through the night – alongside Dave 'Cally' Callaghan and Yorkshire's Ashley Metcalfe, and worked as Radio Yorkshire's cricket reporter – all while broadcasting and writing on football, rugby league, racing and other sports. Cally's untimely death in 2018 was followed by a season of change in the BBC commentary box, but for 2019 Jonathan was offered the role on a permanent basis.

Naturally, Jonathan's style is his own but he also differs from Cally in other ways. Firstly, he's happy using social media, tweeting regular updates and opinions, as well as a short video preview before the start of each day's play. He also tries hard to remember to mute his mobile phone, so avoiding those regular interruptions from local radio stations calling (not always on schedule) for their score update. Overall he hopes his audience will enjoy his approach to commentary.

Jonathan always enjoys interviewing players – especially those who can draw on their experience and reveal something of their true personality. Some players are naturals: Tom Kohler-Cadmore, for example, can easily fill five minutes of airtime in answering a single question! Others are more reluctant interviewees, poor Adam Lyth suffering a moment of pure panic at Scarbados during a switch-over of commentators. The fearless opener would much rather have faced the fastest Michael Holding over than endure twelve long seconds alone in front of the microphone. Jonathan also reckons that much of the vitriol aimed at Andrew Gale (especially on Twitter) is completely undeserved. Indeed he holds Galey in high regard as a man who usually answers questions thoughtfully and honestly even when events are not going his way.

As for YCCC's 2019 season, Jonathan views it overall as a disappointment – definitely under-performing in white ball cricket, while deserving of a higher place than fifth in the Championship . Third place, he felt, would have better reflected their true performance, hampered as they were by two untimely bouts of rain at Headingley. The portents for 2020 are encouraging, however, with some excellent signings and the likely availability of Bairstow and Root for a substantial number of matches. The transition period is over: 'Ambition' is the new watchword.

David Willey, the club's new T20 captain, has taken the winter off to work on his game. He also seems likely to play more red-ball cricket, perhaps sharing the workload with fast bowler Matthew Fisher. After his omission from last year's England World Cup-winning squad, Willey admits that fell out of love with cricket, but this talented all-rounder is now fully committed to his future with Yorkshire. With Dawid Malan, Nicholas Pooran, Adam Lyth and Tom Kohler-Cadmore in the side, the coming short-form matches should be interesting.

Commenting on Duanne Olivier, Jonathan conceded that 'Big D' had experienced some difficulty in adapting to English conditions following his move from South Africa and, after a couple of excellent performances early on, only really started to hit his straps in late season. But Duanne's performance against Kent at Headingley showed that he really is a 'nasty fasty'; if he can stay on top of his game for two-thirds of the time, he'll trouble a lot of county batsmen.

Adil Rashid is never far from a Yorkshire supporter's thoughts, and here we learned that player and club are ‘in talks'and ‘trying to find an answer'– successfully as it turned out, with a white-ball contract signed for 2020. But by Adil's own wishes, we may well have seen the last of him with a red ball in hand. To compensate comes the arrival of Indian Test star Ravi Ashwin. Mick Cadmore, then working with Worcestershire CCC, described Ravi arriving at the New Road nets to bowl a sequence of off-break, off-break, leg-break with no discernible change in run-up, action or release – giving a whole new definition to the term ‘wizard’. Messrs Cadmore and Doidge agreed that Ravi is a player of a completely different class, who will pose real problems to opposing batsmen. None will have a clue what he's about to let fly!
Our chairman was confined to the audience while convalescing from a recent operation, so his question was more line-and-length than googly. What, he mused, was Jonny Bairstow's future? Jonathan, too, can only conjecture. Bairstow was certainly hurt by his omission from the Test team and the squad for Sri Lanka, and presuming England ratify Joe Root's availability for Yorkshire, then Bairstow will also be able to play. But that raises the question of who will keep wicket: Bairstow or (Jonny) Tattersall? If Bairstow wants to regain the England gloves, Jonathan assumes that Yorkshire would want to give him the chance – however unfair on Tattersall, who is learning as he goes and doing a sterling job.

Jonathan also emphasised how tough it is to interview sportspeople who are playing badly. As a professional journalist – even one who plays the sport – you're acutely aware of not approaching the class of your interviewee – but your job is to ask the difficult questions. He's pleased that his professionalism, and theirs, meant no Yorkshire player responded negatively to any critique he made last season. In the end his role is to put the question, leaving the interviewee to decide whether or not to answer.

Jonathan's final advice was a very down-to-earth 'be true to yourself'. And, of course, he closed by reminding his audience to catch every over of Yorkshire's 2020 season with BBC Radio's ball-by-ball commentary. Offering the vote of thanks, Maggie Sumner congratulated Jonathan on the feats of memory that underpin his easy command of so many different sports and offered our very best wishes for the summer to come.

And as a final aside, I must now leave the PA system alone. The microphone and money wizard in our midst had set it up perfectly in advance of the meeting. Unless, of course, I misunderstood events before my arrival, and it was actually the BBC Radio Leeds man who had performed the miracle?