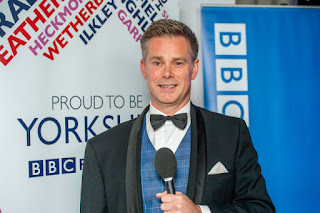 Appointed cricket correspondent of BBC Radio Leeds in autumn 2018 in succession to the late Dave Callaghan, Jonathan Doidge has found his dream job as ball-by-ball commentator on all Yorkshire CCC matches. Join Jonathan to review his first season behind the mike, assess the county's prospects for 2020, and to learn more about this talented sports broadcaster.

It's a no-risk bet that if you hadn't met Rich Pyrah before tonight, within two minutes you found yourself drawn to him. It's his natural balance of personal modesty, a warm heart and a 'look-you-in-the-eye-and-tell-it-like-it-is' style. When your parents meet over a cricket tea, and your granddad and dad play for the club you also join at an early age, you grow up in cricket - as did Rich. His mates spring from that background too: Tim (Bresnan), Andy (Gale) and John (Sadler). But Rich received no favours from Tim’s dad Ray: two overs of outswing, an inswinger and a warning 'don’t get out LBW'. Ignored, of course, when Rich duly planted his leg between ball and wicket.

Progress from Ossett CC to the YCCC 1st team (red and white ball) seemed 'natural' to him, although he confessed that he was a player who had to work hard to survive at the highest level. When not in the 1st XI, he often led, mentored and informally coached the Seconds - and in doing so found his real vocation. He ended his playing career, aged just 32, after back-to-back Championship wins in 2014 and 2015, and immediately joined the club's coaching staff. Dizzy (Head Coach, Jason Gillespie) quickly sent him to the Big Bash - first with Adelaide Strikers and latterly Melbourne Renegades, where he worked with ex England bowling guru David Saker and (in his own words) 'fell in love' with coaching bowlers. On his return to the UK, the Yorkshire Diamonds presented a very different challenge - a mix of international players and complete amateurs stretching his coaching skills to the limit. Today his role as YCCC Bowling Coach is a wide one, working across 1st and 2nd teams and the Academy, as well as keeping an eye out for those who are younger still.

As a coach Rich prefers not to pigeon-hole players, aiming instead to develop their natural style and equip them with all the skills needed to become red, white or multi-format players as they choose. Even unorthodox actions are accommodated - sticking to his guns has certainly worked for one James Anderson. Although discouraged by some coaches for fear of injury, Rich also likes his bowlers to learn by providing pre-match net practice at Headingley and observing how the top players prepare. Some counties discourage this for fear of injury, but Rich supports it wholeheartedly.

Rich's playing career of course generated its own tales. As a promising teenager with Ossett, Rich - alongside John Sadler (now Assistant Head Coach with Northants CCC) - was lucky enough to dine with Sachin Tendulkar, a close friend of Ossett's overseas star Sammy Dighe. Sammy invited the two star-struck youngsters to meet the great man in the Tavern at Lords and over two hours of cricket chat Sachin never once removed his sunglasses. Super cool, thought Rich.


In 2011, with the score at 47-7, Rich arrived - willow in hand - to face a rampant Lancashire attack. Knowing Tim Bresnan had been released from Test duty but was still a couple of hours away (what a game is cricket), Rich decided to 'play some shots' - to such good effect that he and Siddy (Ryan Sidebottom) put on 160 before last man Tim made his belated appearance. And in 2014 he took the catch that won the Championship - no fast-moving reflex effort (far preferable) but a ball arriving so slowly that he had plenty of time to ponder the implications: 'Don’t drop it, don’t drop it' was his only thought. These moments of victory are clearly perilous in the extreme, as Steve Kirby recounted last month. This time it was the Pyrah sunglasses that bore the brunt of the assault, smashed to bits in a collision with a jubilant Jonny Bairstow, but the win was extra special because so many close friends were involved. As the leading bowler on the day, Sid walked off with a stump and ball - but presented both to Rich for his 2015 benefit year.

Our esteemed chairman is always keen to establish that a batsman is frightened of certain bowlers, but Rich would admit to no such thing. Indeed he enjoyed facing the great - for example, Shane Warne, Muttiah Muralitharan and James Anderson - and the quick. Making his first-class debut in 2004, he encountered a fearsome spell from Simon Jones tearing down the slope at a damp Colywn Bay. Rich was hit on the head, but nevertheless scored a doughty 25* off 78 balls.

Training has changed greatly since Rich's arrival on the scene two decades ago. No fast bowler then would have fielded like Matthew Fisher today, with an agility that is both expected and practiced. To enable these feats of athleticism, batsmen concentrate in training on hand speed and strength, while bowlers focus on core strength and stabilisation. Rich uses stats and video analysis but feels that as yet no-one has quite got the balance right. Some players can and do use this information; others find it meaningless or unhelpful. Understanding the player is more important than adopting any one coaching method.

Academy players to watch out for in the coming season(s) include Eddy Booth, James Mukherjee, Harry Quarmby and Sam Wisniewski, and Rich believes that the controversial Hundred will benefit Yorkshire's younger players as they will be given the chance to play in the absence of more senior men. He accepts that a young side will inevitably be inconsistent but argues it is something that coaches must manage. Commenting on two current players, Rich reckons that Gary Ballance may play again for England but, given his previous history, would do so only if the circumstances were right. Meanwhile Matthew Fisher has talent and raw pace aplenty - clocking speeds of 85mph even as a 16-year-old - but the coming season is likely to be the first time his physical development matches his ability. Careful management is aiming to give Matthew the stamina needed to bowl repeated spells over a long career, rather than reach his mid-30s with the body of a 40-year-old, like a certain county colleague! One good season with the White Rose though and it may not be too long before England come knocking ...

Overall, Yorkshire's bowling attack remains a work in progress after the loss of key men like Sidebottom, Brooks and Plunkett. Captain Steve Patterson provides stability and consistency, while South African Duane 'Big D' Olivier is still adapting to British conditions and pitches after a life-changing decision to leave his home country. In 2020 Big D will join the squad for the final two months of pre-season preparations, including matches in Mumbai.

On the current hot topic - how to get Steve Smith out - Rich michievously suggested consulting a statistician ... Alternatively, New Zealand's recent success getting him caught in the leg trap might suggest another answer. Or there's Dizzy Gillespie's mantra, applicable to any bowler facing any batsman: 'hit the top of off stump as often as you can.'
Another hardy perennial beloved by our chairman is this: 'Would you rather win the Ashes or the World Cup?' No hesitation. 'Both,' replied Rich, before adding that England had to prioritise the World Cup in 2019, never having won it before, but now was the time to invest in the next Ashes series. Identifying fast bowlers - potential and actual - and wrapping them in cotton wool from now until then would be Rich's recipe for success, and one he expects England to follow.

Red ball spinners are hard to develop in this country when the county game is played in early spring and late summer - at 5°C in Leeds, the ball will seam around, and wickets will fall. Rich welcomes the abandonment of the ‘no toss’ rule for 2020: Headingley is too flat to secure a result except when slightly under-prepared, which has allowed away teams to come and bowl first to great advantage.

YCCC Board member Katherine Mathew thanked Rich for a hugely enjoyable evening, highlighting memories of his two Championship win - an experience we hope might be repeated as a coach in 2020! As an aside, our high-tech financial wizard got the new PA system up and running with the help of (a) an instruction manual and (b) a pint. So new phrases to learn include: 'mic 1 is live', 'it’s over to mic 2 now', and - memorably - 'Mary had a little lamb'. Happy days. And finally a thought for the next meeting just before Valentine’s Day: given the pub’s tinsel retention policy, and the addition of a strategically placed suit of armour, what new - er - ‘decoration’ can we expect?


Everyone welcome - no dress code, no formalities, just a great evening talking cricket 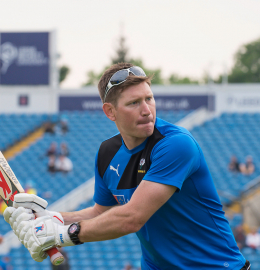 Greet the New Year with Yorkshire CCC player and coach Richard Pyrah, celebrating twenty years with the club in April 2020 after first signing as a sixteen-year-old. On retirement in 2015, the Dewsbury-born all-rounder immediately joined the club's coaching staff and in 2017 was appointed Bowling Coach, working with players at all levels from 1st XI to Academy. Qualified to ECB Level 4, Richard has coached in women's cricket with Yorkshire Diamonds, in the Big Bash with Adelaide Strikers and Melbourne Renegades, and in 2020 will take charge of the 1st-team squad while Andrew Gale is seconded to the Northern Superchargers in the The Hundred competion.