Congratulations to ex-Test umpire John Holder, one of a select group of fifty Barbadians chosen in 2016 to receive the island's Golden Jubilee Award, celebrating the 50th anniversary of independence. John was honoured for his contribution to Anglo/Barbadian relations as well as his cricketing achievements, and on hand to present the award - at a Gala Dinner at London's Savoy Hotel - was none other than Sir Garfield Sobers, a one-time opponent during John's county career.


Introduced to the game by his father, John was involved in the first-class game for over 40 years - first as a pace bowler for Hampshire, then following a back injury as a leading Test umpire. 'I loved umpiring because it suited my personality,' says John, 'and I got to meet great players and see their techniques.' Even in retirement John remains in demand as resident expert for Test Match Special's 'Ask the Umpire'.

Come along to meet John and hear more of his fascinating story, compellingly told by former team-mate Andrew Murtagh in his prize-nominated biography - Test of Character: The Story of John Holder, Fast Bowler and Test Match Umpire (Pitch Publishing, 2016). 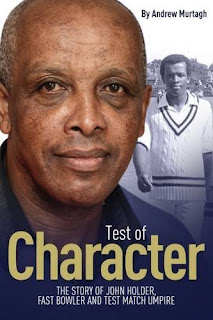