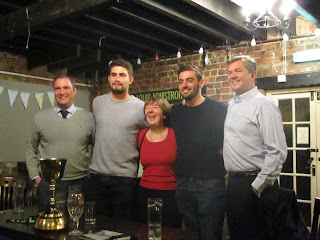 A big crowd for Yorkshire CCC on Wednesday 9 December - champions on and off the field! To top off Championship titles in men's, women's and age-group cricket, Commercial Director Andy Dawson and his team recently received the ECB Business of Cricket Award 2015, while Jonny Bairstow and York's Jack Leaning were named Championship Player of the Year and Young Cricketer of the Year by the Cricket Writers' Club - succeeding Adam Lyth and Alex Lees.

Fresh from Lords, where he was presenting Yorkshire's bid for a team in the first Women's Cricket Super League, Chief Executive Mark Arthur opened up with a forthright appraisal of the club and its ambitions over the next five years before introducing Andy, Jack and ex-England Under-19 Captain, Cottingham's own Will Rhodes. A chance for a photo with the historic Championship trophy, then a lively Q&A session kept all the speakers on their toes! Both Jack and Will have an exciting few months ahead. Jack is now en route for Sydney to spend his third winter with Sutherland CC, while Will plans to head for India to gain more experience of facing spin bowlers. Best of luck to them both!

STOP PRESS: Dickie Bird's visit on 10 February 2016 will be open to members and pre-registered guests only. Guest admission £10. 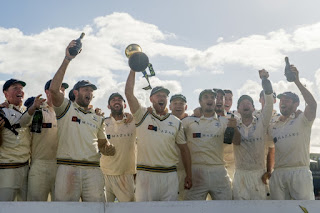 Join local Yorkshire CCC stars Will Rhodes and Jack Leaning, Commercial Director Andy Dawson and Chief Executive Mark Arthur to celebrate the club's second successive Championship title and look forward to the 2016 season. Yorkshire's success - with Beverley bowler Steve Patterson also prominent - came despite losing seven players to England at various points in the season and with two and a half games still to go. 'The first win [was] really special,' commented Director of Cricket, Martyn Moxon, 'but given the circumstances this is probably a bigger achievement than winning last year. To combine developing England players with domestic success is a fantastic effort from everyone involved.'

The historic Championship trophy will be on display throughout the evening. Photo opportunities galore! 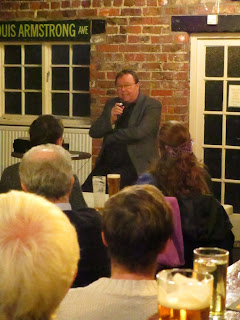 Former Sports Editor of Radio Leeds, Dave Callaghan is now the BBC's 'Voice of Yorkshire Cricket', his ball-by-ball commentary on all Yorkshire CCC matches updating supporters from Beverley to Bulgaria, Aldbrough to Australia. No one has a closer view of the club and its players, and the summer of 2015 offers a host of talking points for his traditional season review - including Yorkshire's back-to-back Championship triumphs, England call-ups for Root, Ballance, Bairstow, Rashid, Plunkett and Lyth, Joe Root heading the world batting rankings, an exciting new signing in David Willey, and much, much more.

In this change to the advertised programme, Dave replaces Rich Pyrah. Rich was appointed to Yorkshire CCC's coaching staff on 1 October and his new duties have forced him to cancel. He sends his profound apologies and hopes to join us at a future date.

Please note the society's AGM will be held prior to this meeting at 7.15pm. 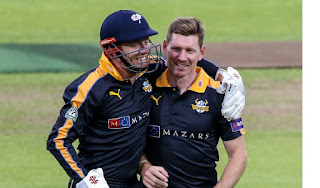 East Riding Cricket Society's November speaker will be Yorkshire CCC all-rounder and 2015 Beneficiary Richard Pyrah, who recently called time on a 12-year professional career to take up a full time-post on the club's coaching staff. A versatile bowler, batsman and fielder, Richard made history by taking a catch off James Taylor at Trent Bridge in September 2014 to secure Yorkshire's first Championship in 13 years. But perhaps his finest hour came against Lancashire at Headingley in 2011 when his superb 117 steered Yorkshire to a memorable victory from the seemingly hopeless position of 45 for 8. Richard has also been a key man in the county's limited overs and Twenty20 teams, producing Yorkshire's best T20 bowling performance with his 5-16 at Scarborough in 2014.

The only East Riding date in Richard's benefit year - and a chance to say thanks to a wonderful servant of Yorkshire cricket! 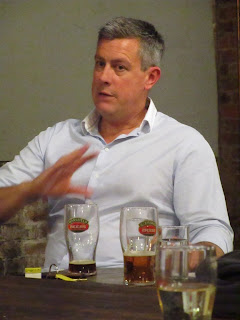 Test star Ashley Giles launched East Riding Cricket Society's Golden Jubilee programme on Wednesday 14 October with a wonderful evening of cricket chat at the King William IV, Cottingham. Quizzed by journalist Brian Halford, the ex-England spinner led a packed house from his idyllic Surrey childhood to the heart of England's nailbiting 2005 Ashes triumph - from defeat at Lords, via a view from the middle of Kevin Pietersen's crucial 158* in the final Oval Test, to celebrations on the steps of 10 Downing Street. Beyond the first-class game, Ashley was a proud team captain in the highest-ever cricket match, a 10-over affair played at 5,752m on Mount Kilimanjaro in September 2014. Battling altitude sickness and biting cold, with temperatures down to -20C, thirty climbers raised over £200,000 for charities including Cancer Research UK. Ashley and his wife Stine have also recently founded their own charity, the Giles' Trust, helping to fund brain tumour research at Queen Elizabeth Hospital, Birmingham.

Ashley enjoyed himself, too. 'Thanks, really enjoyable night,' he tweeted. 'Best of luck with your 50th Anniversary celebrations!'

Next meeting: Wednesday 11 November 2015. Don't miss Yorkshire all-rounder Richard Pyrah in one of the final events of his 2015 Benefit Season. The AGM will be held before this meeting at 7.15pm. 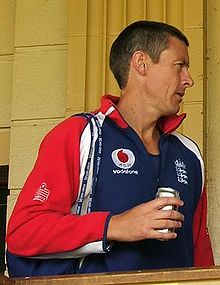 East Riding Cricket Society opens its Golden Jubilee season in fine style with former England all-rounder, selector and limited-overs coach Ashley Giles. Veteran of 54 Tests and 62 One-Day Internationals, Giles played a pivotal role in the 2005 Ashes, his career-best 59 at the Oval helping to seal England's first series win over Australia in 18 years. Now Director of Cricket with Lancashire CCC, Giles coached his side to a  successful 2015, securing a T20 Blast triumph and a return to the County Championship Division 1. A renewal of traditional rivalries with back-to-back Champions Yorkshire will be eagerly anticipated in 2016. Other highlights of the winter programme have a strong Yorkshire flavour, including legendary umpire and current club president Dickie Bird, all-rounder and newly appointed coach Richard Pyrah, plus Chief Executive Mark Arthur and First XI players. 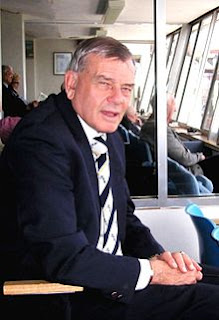 Dickie Bird, Ashley Giles and Richard Pyrah are just three of the star speakers helping to celebrate the Golden Jubilee of East Riding Cricket Society in 2015/16.

Legendary Test umpire Dickie Bird is the current President of Yorkshire CCC, 2005 Ashes winner Ashley Giles is a former England 1-Day coach and now Head Coach of T20 Blast winners Lancashire CCC, while Yorkshire all-rounder Richard Pyrah is enjoying a well-deserved benefit in 2015. Other treats include our Champions' Evening, giving members and guests the chance to celebrate Yorkshire CCC's 2015 Championship victory with CEO Mark Arthur and 1st XI players; Graham Relton of the Yorkshire Film Archive will present fascinating rare footage covering over a century of Yorkshire cricket; finally, Grahame Lloyd will reveal the intriguing saga of the ball hit for 'Six Sixes' by Garry Sobers at Swansea in 1967. 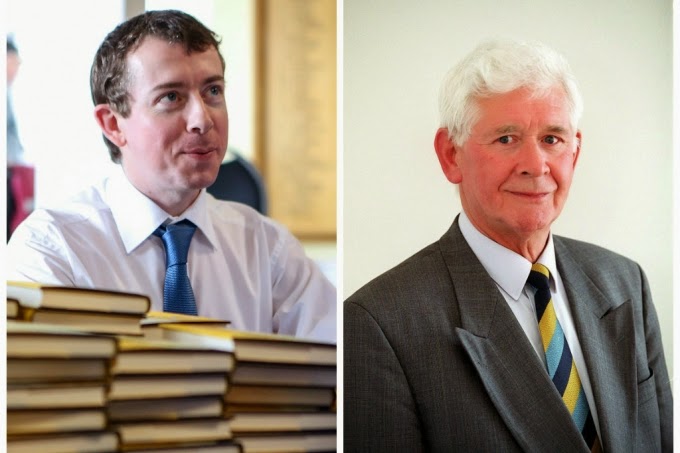 Chris's first book, Fred Trueman: The Authorised Biography was the 2012 Wisden Book of the Year, the MCC/Cricket Society Book of the Year and the British Sports Book Awards Cricket Book of the Year. Now in Ten for Ten: Hedley Verity and the Story of Cricket's Greatest Bowling Feat, Chris turns his attention to one of Yorkshire and England's finest cricketers. 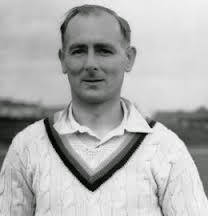 At Headingley against Nottinghamshire in 1932, Hedley Verity returned the staggering figures of 10 for 10 - still the world record - and Chris narrates the story of this amazing game in relation to a wider career cut tragically short by the Second World War. Between 1930 and 1939 Hedley took 1,956 wickets at an average of just 14.90. He was chiefly responsible for England's only twentieth-century Ashes victory at Lord's, when his 15 wickets helped to win the 1934 Test - 14 of them captured in a single day. He also dismissed the legendary Australian batsman Don Bradman more often than anyone else in Test cricket, claiming his wicket on eight occasions - and a record-equalling ten times in first-class cricket.

In 1939 Hedley Verity joined the Green Howards, dying of his wounds at Caserta on 1 September 1943, just four years after his final appearance for Yorkshire, when he took 7 for 9 against Sussex at Hove.

Signed copies of Ten for Ten will be available on the night. Don't miss this opportunity to add it to your collection!

Advertised speaker Richard Blakey has been forced to cancel at short notice. We hope to rebook Richard at a later date. 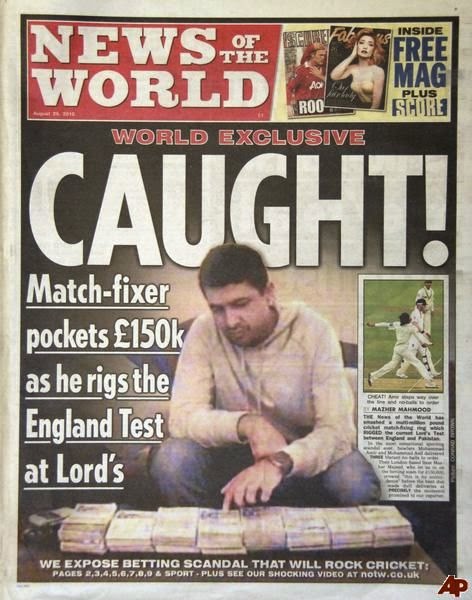 An evening with a difference!

Ex-Metropolitan Police officers Chris Watts & Steve Richardson of the ECB Anti-Corruption Unit will give a fascinating insight into the efforts being made to eliminate corruption from cricket. Chris & Steve will also show the video made in cooperation with convicted Essex player Mervyn Westfield, now watched by all first-class players in the ECB's efforts to stamp out future acts of corruption. While the Unit operates a confidential anti-corruption hotline, it is by no means a covert operation and its small team tries to be seen at as many matches as possible around the year.

Thanks to Dave Callaghan for stepping in at short notice to present such an entertaining review of Yorkshire's Championship-winning 2014. Dave highlighted the East Riding's Steve Patterson as one of the key factors in the club's success - alongside captain Andrew Gale, prolific openers Adam Lyth and Alex Lees, pace bowler Jack Brooks and a rejuvenated Adil Rashid. With representative calls likely to disrupt the team in 2015, Dave is looking no further than a top three Championship finish, but he confidently expects more silverware - perhaps in a 1-day trophy where Yorkshire under-performed last year. Dave also paid tribute to Colin Graves, 'the White Knight of Yorkshire Cricket', and predicts that Colin will make a similarly positive impact as the newly appointed Chief Executive of the ECB.

Our next meeting on Wednesday 11 February promises a fascinating evening in the company of Chris Watts and Steve Richardson of the ECB Anti-Corruption Unit.

Please note that the visit of Yorkshire Chief Executive Mark Arthur, originally listed in our programme, has been postponed to 2015/16. Mark's planned visit unfortunately clashed with a trip to Abu Dhabi to set up Yorkshire's pre-season Champions game v MCC. In the meantime you can hear Mark at Cottingham CC, Hilltop, on Thursday 26 February 2015, 7pm. All welcome! 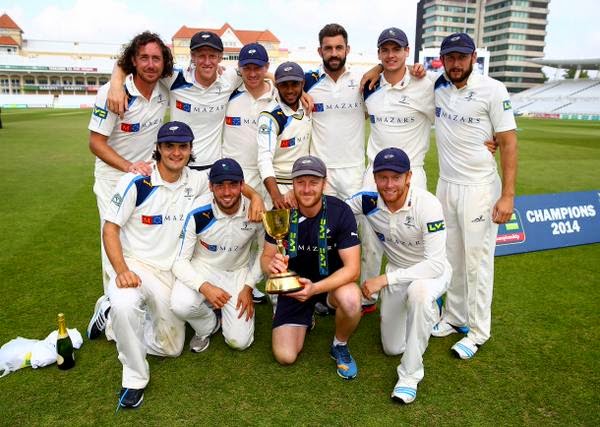 One time Sports Editor of Radio Leeds, Dave Callaghan is now the BBC's 'Voice of Yorkshire Cricket', keeping supporters from Iceland to Bulgaria, America to Australia, entertained and informed with his ball-by-ball commentary on all the county's matches. In his 2014 season review, Dave will provide his unique insight into a very special summer, highlighting the stories and personalities behind Yorkshire's hugely impressive County Championship triumph.