Gary Ballance heads Down Under 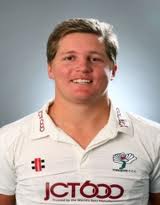 Yorkshire CCC's Gary Ballance heads out to Australia this week with the England Lions, and captain Andrew Gale is tipping him for full international honours. Read more in the York Evening Press and follow Gary throughout the trip in a weekly Saturday column.

In South Africa great excitement for Yorkshire CCC Under-19 stars Josh Shaw and Jonny Tattersall, part of the winning England team in the 1st Youth Test at Cape Town.

For more news updates and selected links to the best of cricket journalism Follow @ERidingCricket
Posted by East Riding Cricket Society at 13:55 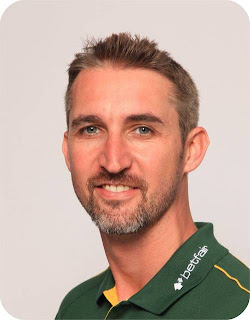 Listen out for the first of West Yorkshire Sport's monthly cricket specials tonight on Radio Leeds, with host Dave Callaghan and guests Jason Gillespie, Martyn Moxon and Darren Gough. The show is on air at 6pm - or choose when to listen with catch-up radio.

Elsewhere Yorkshire CCC's new recruit Jack Brooks talks about his new start at Headingley. TMS announces its commentary team for the tour of New Zealand. England's Graeme Swann takes tea with Alison Mitchell. The ECB's Cricket Factory was up and running in Hull last night. And, with the Ashes coming up, Shane Warne sets out his alternative view for the future of Australian cricket.

For more news updates and selected links to the best of cricket journalism Follow @ERidingCricket
Posted by East Riding Cricket Society at 09:56 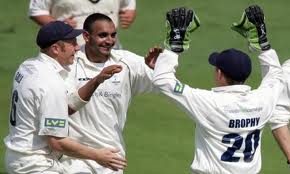 Watch here as Joe Root talks about his seeming lack of nerves and great start in all forms of international cricket.

Ajmal Shahzad (pictured left) explains what lay behind his high-profile split with Yorkshire last year and reveals his hopes for the new season at Notts.

Meanwhile Yorkshire CCC isn't the only club in the county celebrating its 150th anniversary this year. Read more about the Yorkshire Gentlemen's Cricket Club and its plans for a battle of the blazers with the MCC.

For more news updates and selected links to the best of cricket journalism Follow @ERidingCricket
Posted by East Riding Cricket Society at 17:23 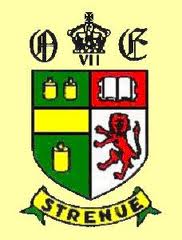 Great to hear from past secretary, chair and president Terry Frost. Our list of past speakers brought back many memories for Terry ... and he was also able to solve a mystery for us. Who was 1982 speaker A.W. Lawson? Thereby hangs a tale ... so we'll let Terry take up the story. 'At the time,' he writes, 'I was chairman and Harold Cook was secretary. Harold called me the day of the meeting to say that our speaker, the late Peter Roebuck, would not be coming to Hull due to illness! How could Harold and I possibly find a speaker for that night? After lunch we were faced with the daunting task of cancelling the meeting. Then, through my office door at Fenners, in walked Alan Lawson! Alan had just arrived from Heathrow, having landed from South Africa that morning.

Alan, a director of Fenner South Africa and a close personal friend, was steeped in South African cricket at a time when it was was ostracised by the cricketing world. He was chairman of Old Edwardians cricket club in Johannesburg and, even though desperately tired, agreed to talk about grass-roots cricket in the country. In his quiet, unassuming manner, he really did explain the ‘other side of the coin’, focusing his talk on what was happening at junior club level across all boundaries.

Alan held us all spellbound, and it was almost 10.00 p.m. when I finally closed the meeting to let him to go to bed! I still correspond with him from time to time and a couple of years back Old Eds honoured him by naming their ground ‘The Alan Lawson Oval’.

I wish you all well. The ERCS was an important part of my long cricketing life.'

Bairstow back for England 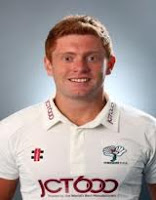 Hot off the press. Jonny Bairstow will be rejoining England's 15-man test and limited-over squads in New Zealand in February.

Iain Wardlaw is dreaming of a Scotland call-up.

Plus Michael Vaughan looks back on his time as England captain.

For more news updates and selected links to the best of cricket journalism Follow @ERidingCricket
Posted by East Riding Cricket Society at 07:49 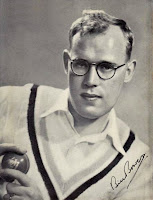 New to Pace and Bounce. We're proud to present the full list of all our speakers since Bill Bowes (pictured right) - the great Yorkshire fast bowler of the 1930s and later cricket correspondent of the Yorkshire Evening Post - first opened the batting in 1966. (An unusual experience you might think for a man with a first-class average of 8.60!) Plenty of great names among them. Click on the links to read more about a speaker, and watch out for future articles taking a year-by-year look at the society as we build up to our Golden Jubilee.
Posted by East Riding Cricket Society at 19:54

Email ThisBlogThis!Share to TwitterShare to FacebookShare to Pinterest
Labels: Bill Bowes, Past speakers

Meanwhile Graham Hardcastle provides an update on Yorkshire's overseas recruitment targets for 2013; Nick Ahad, the Yorkshire Post Arts Correspondent captures the emotion of the Sesquicentennial Soiree in Sheffield; and Yorkshire offer you the chance to download the First XI fixtures calendar and make sure that you never miss a game! 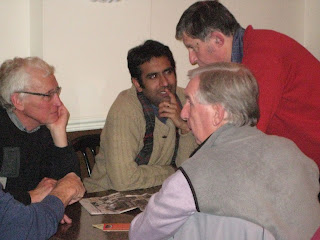 A big day for Pace and Bounce yesterday. We registered our thousandth visit since September. Thank you to everyone who has visited the blog over the past four months and helped to make it such a success. Keep on reading - more here on Headingley's new role as a concert venue and Joe Root's reaction to his winning start in the England one-day team.
Posted by East Riding Cricket Society at 12:49

Yorkshire have what it takes to achieve success in their 150th anniversary season. That's the opinion of our latest speaker, Lancashire's assistant coach Gary Yates. Yorkshire have recruited well over the winter, reckoned Gary, increasing competition for places in the team with the signature of highly rated pace bowler Jack Brooks from Northants, and former England man Liam Plunkett from Durham. Lancashire too were interested in signing Brooks, he revealed, but they came off second best on this occasion. Gary also explained exactly why Lancashire's young players had managed to win the county championship in 2011, why they suffered unexpected relegation in 2012, and why he backed them to bounce back straight away in 2013. 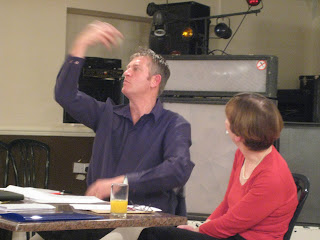 As coach to Lancashire's highly successful Second XI, Gary gave us a fascinating insight into modern coaching ideas and how he goes about developing aspiring test and county cricketers. As a spin bowler he provided an action close-up of the doosra and the teesra, leading to a lively discussion on their legality and their role in the modern game. And as a close friend of England captain Mike Atherton, dating as far back as their time together as classmates at Manchester Grammar School, he painted a warm portrait of the man behind the public face. 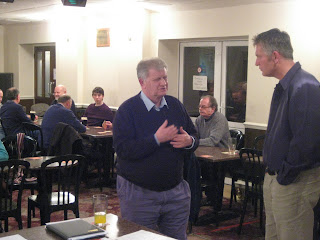 In the week when Shane Warne and Marlon Samuels clashed in the Big Bash League,  Gary also gave us a glimpse of the way we would surely prefer to see cricket played. In 1990 he made his championship debut against Nottinghamshire at Trent Bridge. Batting at nine, he was 45 not out at the end of day one - with Peter Martin for company and only Paul Allott to come. The following morning Martin was out straight away but the tenth wicket partnership flourished. Then came disaster. With his score on 72 Gary joined the legion of batsmen fooled by Franklyn Stephenson's slower ball. Hit flush on the elbow attempting to hook, he fell to the floor and lay there fearing the worst. Surely he wouldn't be forced to retire hurt? But help was on its way - and from an unexpected quarter. 'Come on, Gary. You can do it,' said Nottinghamshire's Derek Randall, appearing at his side. 'Only 28 more to go and you've a century on debut.' Randall's confidence was well founded. Yates and Allott added 116 for the last wicket, and 'in a superb ... chanceless innings' of 106 Gary became only the fourth Lancastrian to score a hundred in his first championship match.

Don't miss our next meeting at Humberside Police Sports Club on Wednesday 13 February, when our speaker will be Matthew Wood, former Yorkshire and Glamorgan opener, and now a Personal Development Manager with the PCA. 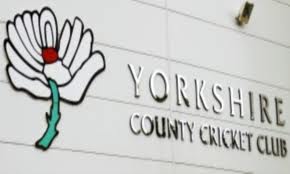 Meanwhile new signing Liam Plunkett is heading off to Adelaide for a couple of months at the Darren Lehmann Cricket Academy, and Yorkshire are planning to follow Old Trafford's lead with a series of concerts at Headingley over the next couple of summers, subject to council permission.

For more news updates and selected links to the best of cricket journalism Follow @ERidingCricket
Posted by East Riding Cricket Society at 14:42 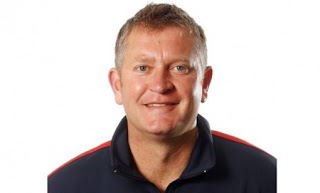 We've got plenty of questions to put to Gary Yates this coming Wednesday night. Read on to see what's on our minds. Do you have anything you'd like to add? Whatever your question, please email or telephone 01482 861848 by Tuesday evening.


1. Did you ever consider taking up umpiring? Who did you consider the best umpire? And, as a player, did you ever give an umpire any grief when you were bowling?


2. Former Lancashire chairman Cedric Rhoades was talking about the creation of a big city limited overs league in the 1960s, and Michael Vaughan among others has recently expressed support for a Aussie-style T20 league. How you would like to see 20-over cricket develop in this country?

3. What impact has 20-over cricket had on the development of young spinners like Stephen Parry and Adil Rashid?

4. Lancashire captain Glen Chapple has been described as 'the best ever bowler never to play test cricket'. Do you agree? Can you give us some insight into his value to Lancs as bowler, batsman and captain?

5. Who else among your contemporaries do you feel could or should have played for England?

7. James Sutherland of Cricket Australia claims today that yesterday's Warne/Samuels incident increases interest in the BBL. How do you react to that as a coach primarily responsible for the development of young cricketers?

8. Do you watch with envy as modern off-spinners claim such a high proportion of LBWs. How much has DRS changed umpiring decisions in non-televised matches? And how has it affected your coaching?

9. Why did Yorkshire ever let Gary Keedy go? What are the qualities which have made him such a valuable player for Lancashire over the past seventeen seasons?

10. How do you and Peter Moores share the coaching duties at Lancashire? How did you successfully bring so many young players into the championship winning side in 2011? And what went wrong in 2012?

11. How do you rate the prospects for Yorkshire and Lancashire in 2013? And for the new players on either side - Brookes and Plunkett for Yorkshire; Kabir Ali and Katich for Lancashire?

12. What about the next crop of young players? Can you give us some names to watch out for - Lancashire and Yorkshire - in 2013?
Posted by East Riding Cricket Society at 14:49