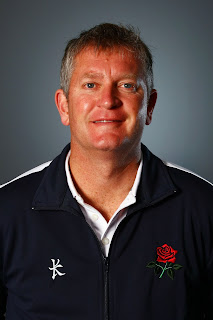 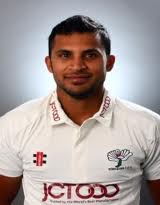 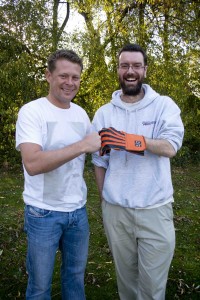 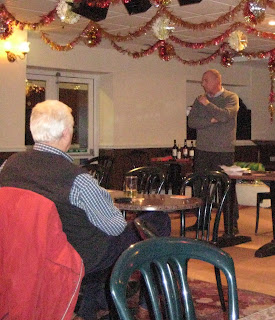 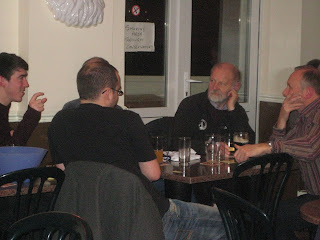 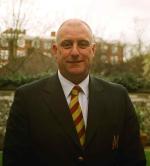 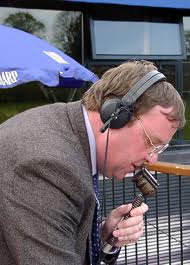 It's all things Yorkshire on 14th November when the BBC's Dave Callaghan will be our guest. One-time Sports Editor of BBC Radio Leeds, Dave now provides ball-by-ball commentary on all Yorkshire's matches for BBC radio, giving him an unequalled view of the county's successful 2012 season. We'll certainly have plenty to talk about: promotion to Division 1; a marvellous T20 campaign; a trip to South Africa for the Champions League; the impact of new coach Jason Gillespie; Tim Bresnan, Jonny Bairstow and Joe Root touring India; newcomers Jack Brooks and Liam Plunkett; youngsters Gary Ballance, Azeem Rafiq and Moin Ashraf; Hull's own Steve Patterson, and much, much more.

Make sure you join us for a lively evening of cricket chat!

Our postponed AGM will also take place prior to this meeting, starting at 7.15 p.m.
Posted by East Riding Cricket Society at 10:30 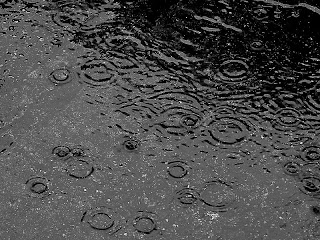 Interesting report on Cricinfo this morning on the effects of the weather on the 2012 season. You won't be surprised to learn that Yorkshire were the worst affected of all - robbed of contesting as many as 151 Championship points. Meanwhile Derbyshire - along with Sussex - were most favoured by the elements. No mention of this from Karl Krikken and the several Derbyshire societies in attendance at the Council of Cricket Societies last Saturday!

More to come from Cricinfo on the season in statistics over the next three days.
Posted by East Riding Cricket Society at 10:04 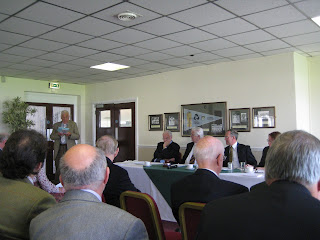 A good day at the Council of Cricket Societies half-yearly meeting at the weekend. Around twenty other societies represented. Great opportunity to make contacts and pick up ideas for future speakers. Plus a very interesting Q&A session with Derbyshire coach Karl Krikken. 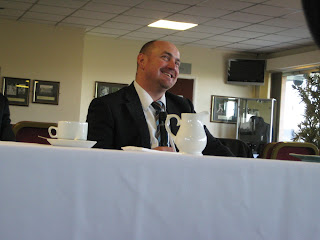 Dave Callaghan, the voice of YCCC on BBC radio, will give us his close-up view of Yorkshire's eventful - and very successful - 2012 season at our next meeting on Wednesday 14th November, 7.45 p.m. Plenty to discuss. Come armed with your questions!

NOTE TO MEMBERS: Our AGM, postponed from October due to illness, will be held prior to this meeting at 7.15 p.m.
Posted by East Riding Cricket Society at 08:41 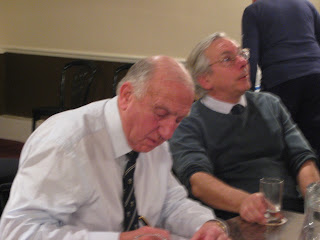 Micky Stewart (seen signing copies of his new biography, Micky Stewart and the Changing Face of Cricket) entertained a packed audience of members and friends earlier this month. From his views on the Kevin Pietersen saga, via the inside story of the Shakur Rana affair, to his memories of Surrey greats like Alec Bedser, Ken Barrington and Tony Lock, Micky kept us enthralled for well over two hours. Other stories were less well known. But for cricket, Micky might have taken part in the 1956 Melbourne Olympics. Although selected to represent England at soccer, Micky was reluctantly withdrawn from the party when the Olympic Committee found out that he played as a professional with Surrey. And who should have taken part in Micky's benefit match at the Oval in 1972 but the crooner Andy Williams, signed up by his agent (and cricket nut) Vic Lewis after a TV appearance with Michael Parkinson.


Join us next time on Wednesday 14th November for an evening with the BBC's Dave Callaghan and catch up on an exciting summer for Yorkshire cricket. Everyone welcome. Non-members £5.
Posted by East Riding Cricket Society at 16:03 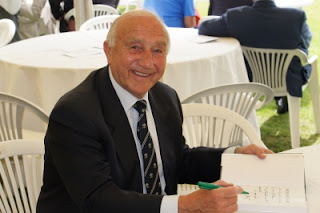 Stop press. Former England cricket manager, ECB director of coaching and Surrey captain Micky Stewart will be joining Stephen Chalke as our guest on Wednesday October 10th. Intelligent, opiniated and insightful, few have such a comprehensive overview of the game as Micky, now in his 80th year. With candid takes on such household names as Botham, Gower, Gatting and Gooch, his long-awaited biography, published in July, makes for a compelling story.

Micky also has a tale to tell about his last visit to Hull in 1968, when he bagged a pair (both lbw!) as Yorkshire defeated Surrey at the Circle to take their third County Championship in succession. He's looking forward to a more enjoyable visit this time!

MEMBERS: don't forget we're holding our AGM at this meeting, starting at 7.15pm. Please turn up early and have your say.
Posted by East Riding Cricket Society at 14:53

We are pleased to announce an exciting and varied programme of speakers for 2012-13. Author and publisher, and spellbinding raconteur, Stephen Chalke makes a welcome return to the Society in October. Signed copies of many of Stephen's award-winning books will be available. Stock up early for Xmas!

In November the BBC's Dave Callaghan brings us his popular season review. Dave will have seen every ball bowled by Yorkshire over the eventful 2012 season and will share his usual trenchant opinions.

December sees the visit of Yorkshire stalwart Jim Love to Inglemire Lane. Mainstay of the Yorkshire middle order for 15 years and later Director of Cricket for Scotland, Jim is now Regional Manager with the Cricket Foundation and coach of York CC.

Crossing the Pennines, Gary Yates, Lancashire off-spinner and now assistant coach with the club, joins us in January. As Second XI coach he was responsible for the development for many of the locally born players now starring with the current county champions.

In February we welcome Matthew Wood, not only a doughty opener for Yorkshire and Glamorgan, but now a Personal Development Manager with the Professional Cricketers' Association.

Our March speaker is now confirmed. We will be celebrating Yorkshire's 150th anniversary with David Warner, former cricket correspondent of three Yorkshire newspapers and editor of the much acclaimed Yorkshire CCC Yearbook. David has drawn on his personal collection of almost four decades of cuttings in writing his new book, The Sweetest Rose: 150 Years of Yorkshire County Cricket Club, 1863-2013.

We look forward to welcoming members old and new at our meetings throughout the winter. Membership costs £15 for the season. Non-members are also very welcome - £5 per meeting.
Posted by East Riding Cricket Society at 17:15