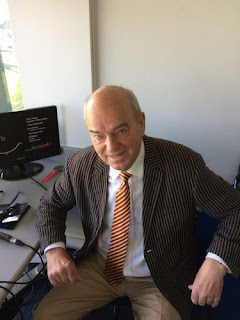 Journalist, author and broadcaster supreme Pat Murphy retired in 2017 from a full-time role with BBC Radio after almost fifty years reporting on cricket and football. Still to be heard on Sports Report every Saturday teatime, Midlands-based Pat covered international and county cricket, including home Tests from 1982 to 2017 - ending as he began at his beloved Edgbaston - and overseas tours from 1986 to 2007. Among his favourite memories are an exclusive in-depth discussion with Harold Larwood in 1987, and an hour-long live broadcast from the victorious England dressing-room at the Oval in 2005, after the Ashes had been regained for the first time in sixteen years. 'Champagne everywhere,' Pat recalls, 'yours truly swigging from a magnum ... courtesy of Marcus Trescothick ... No time to tell the players about matters of taste – but mercifully and memorably we got through it unscathed.' His dozens of books include bestselling biographies of Ian Botham and Brian Clough, while his latest work (due this spring from Fairfield Books) will commemorate the 25th anniversary of Warwickshire's legendary treble-winning season of 1994.