Join the conversation - everyone welcome! 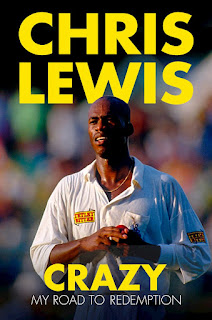 ‘... when that officer returns after ... [finding] cocaine I know that, from that moment, everything is going to change.’ Born in Guyana in 1968, Chris Lewis arrived in the UK aged 10 and went on to play thirty-two Tests and fifty-three one-day Internationals for England. Yet this hugely talented all-rounder often felt at odds with the game, courting off-field controversies lapped up by the tabloids. After naming three England players allegedly involved in a match-fixing scandal, he drifted out of first-class cricket, aged just 30. In 2008 a surprise pay-as-you-play t20 contract with Surrey was ended early by injury, and later that year he was arrested at Gatwick Airport, tried and convicted of smuggling cocaine, and sentenced to thirteen years in gaol. Released in 2015, Chris is gradually rebuilding his life - playing, coaching and working with the Professional Cricketers' Association to better prepare current and future players for life after the game. His autobiography Crazy: My Road to Redemption was published last year, and The Long Road Back, a play by Dougie Blaxland - a.k.a James Graham Brown (Kent & Derbyshire), author of the acclaimed When the Eye Has Gone, on the life of Colin Milburn - will tour next spring.

Signed copies of Crazy: My Road to Redemption available on the night.